In the shattering finale, Kristi reveals all the horrifying secrets of the abduction of Michael’s wife Kara, and the two of them both lay bare their souls as they deal with the all the fallout of lust, obsession, possession, and vengeance. This is the final chapter of CONFESSIONS OF A KIDNAPPER.

Buy it HERE ON AMAZON, FREE on Kindle Unlimited.

25 years ago, Kristi King was held captive and tortured by a blue-eyed, baby-faced psychopath and his sadistic wife. In this shocking penultimate chapter of the story, we find out the terrors she endured, as well as her shocking escape. Meanwhile, in the present day, Kristi makes an offer to Michael that might cost both of them their souls …

Get it HERE on Amazon, free on Kindle Unlimited 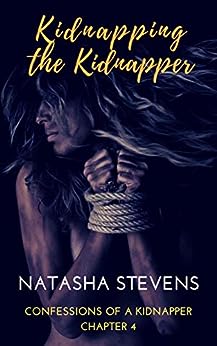 This is the 4th chapter in the exciting and disturbing new dark psychological thriller novel from Natasha Stevens, author of I OWN YOU and JANA’S JOURNEY.

Get it HERE now on Amazon! Free on Kindle Unlimited!

Today, Kristi King is in control, a successful psychiatrist and victim’s rights advocate. The man who kidnapped and abused her is behind bars, and she has a secret that she hopes will destroy him.

This is the latest shocking installment in a new dark extreme psychological horror novella from Natasha Stevens, author of I OWN YOU and JANA’S JOURNEY. Trigger warning: contains disturbing content and violence.

Buy it now HERE on Amazon.com, FREE on Kindle Unlimited.

All right, I’m back to writing … Chapter 4 coming soon!

I wanted him to be my knight in shining armor … but he was the dragon in disguise.

This is the story of how I became a victim of sex trafficking, right in my own home city.

It started with a seduction, at a party, surrounded by friends and people I knew. It was a boy everyone knew and liked.

But the darkest and most wicked things can happen in public, I found that out. And the worst evil can come wearing a smiling face.

And I had no idea of the consequnces of some seemingly harmless and innocent fun.

Seduced, violated, and blackmailed, I was first lured into working as a cam girl, and then as an “escort” and party girl, all the while being used and mentally and physically dominated and controlled by men with the darkest urges, until it all spiraled out of control in a whirlwind of sex, drugs, and finally, violence.

This is my story.

BASED ON A TRUE STORY! Ten percent of profits form this story will be donated to an organization devoted to ending domestic sex trafficking. TRIGGER WARNING! GRAPHIC CONTENT!

Buy it now HERE on Amazon . Free on Amazon unlimited!

I started this story under another name — Samantha Winters — a couple of years ago and I finally wrapped it up and decided to publish the whole thing in my own name.

The ending is a bit abbreviated, I admit, but I decided that the poor girl had suffered enough.

And yes, I’m trying to get back to writing regularly. Trying!

Get it HERE ON AMAZON!

Hello folks, I’m still alive but taking a break from writing — one of those enforced, “real life is calling” breaks — but the next chapter of CONFESSIONS OF A KIDNAPPER is coming in a few months, hopefully. In the mean time enjoy this one.

Get  it HERE ON AMAZON!

25 years ago, Kristi King was the hottest adult film star in America, lusted after by millions. But on Halloween night, her world was shattered. A sadistic, baby-faced predator brutalized and humiliated her, before kidnapping her to satiate his own dark and twisted desires.

Now, 25 years later, having rebuilt her life as a psychiatrist and victim’s right advocate, she finds herself sitting across a table from the man who tortured her, as part of a “restorative justice” confrontation, reliving every terrifying moment of her abduction.

But this time she is in control, and she has some dark secrets of her own to share with him …

This is an extremely dark and twisted extreme psychological horror Halloween short story from Natasha Stevens, author of I OWN YOU and JANA’S JOURNEY. Trigger warning: contains disturbing content.

So! You want to see something scary?

Yes, it’s the same Kristi King who is Jana’s psychiatrist in JANA’S JOURNEY BOOK 2, of course, and also the mother of Christopher from THREE DAYS A SLAVE. And the full story of Christopher’s birth will be revealed . . .

No romance in this one, folks, or not yet anyway – this is pure straight up rapesex horror.

The complete collection available NOW HERE ON AMAZON! Free for the next five days.

There’s a new hot guy in 18-year-old Emma’s life and home, in the form of a tall and savagely handsome new MMA fighter bad boy stepbrother. Living with the family after an injury, he’s a hard-partying and selfish alpha male with a bad attitude, and she’s fed up with him.

But why does she get so hot when he’s around?

And what’s more, his illegal cage fighting has put him on the wrong side of the Russian mafia. And he wants to involve Emma in a very dangerous plan to rob some very dangerous people …

This is the latest sexy and shocking new dark romantic adult contemporary thriller from Natasha Stevens, author of I OWN YOU and JANA’S JOURNEY.

And some seriously scary Halloween stuff coming up this week …

The final chapter is here!

Cage fighter Wade and his stepsister Emma have finally gone through with their plan to rob the Russian mafia.

But nothing has gone according to plan, and now both of them are in deep, deep trouble…

This is the thrilling and brutal conclusion to the STEPBROTHER BRUTE series.

Get it HERE NOW on Amazon!

So it turned out pretty violent. I think I actually intended this series to be kind of light, but hey, you rob the Russian mafia, something bad is going to happen, and I wanted to show that.

Also, Valeria somewhat surprised me with how dark she went here. I wanted to keep her out of the main body of the story, actually, but sometimes characters do things you hadn’t originally planned as the story develops organically.

Emma’s relationship with her stepbrother, underground pit fighter Wade, took a turn for the hot and heavy very quickly, but now she finds herself involved in his plan to rob the Russian mafia.

And all she has to do, with the help of her sexy friend Valeria, is plant a listening device in the room of a ripped and dangerous Russian gangster … a gangster with a fondness for knives — and for young women.

Is she in too deep? Is she willing to go to the edge … and then cross it?

This is the latest shocking, sexy, and thrilling Russian mafia crime thriller from Natasha Stevens, author of I OWN YOU and JANA’S JOURNEY. Get it HERE NOW AT AMAZON!