Okay, so I posted my story THE GARDENER AND THE TEASE on Literotica, and you can get it free, here on SMASHWORDS. 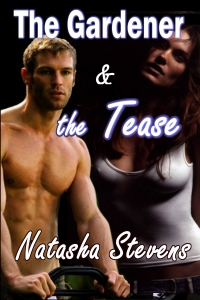 And I got a lot of positive votes, but also a couple of somewhat disgruntled comments:

This is a good version of the gardener scene from “Insatiable”

And this has answered a question that I have been wondering about since the first time I masturbated.

See, back when I was a blossoming adolescent, I discovered a videotape with no label with some others in the bottom of a closet. (This was a bit before the internet, and though DVDs existed, we still had a video player.)

Suspecting that the tape was something good, I waited until my parents were out one night to watch it.

On the video, a young lady with hair several years out of style was telling a young man who looked a bit like Tony Danza to get out of the billiard room, because he was just a gardener.

He responded by throwing her down on the table and forcing her to have sex with him.

The thing that particularly impressed me was his verbal domination of her … and how he did eventually get her verbal consent to continue fucking her. (We see this kind of thing in my writing a lot.)

God, I was so turned on!

I hid the videotape in my underwear drawer and went upstairs and masturbated for the first time.

I never watched the video again though — it disappeared from underneath my panties and I never saw it again. I don’t know if my parents found it or if my stepbrother took it or what. None of them ever mentioned it to me.

So I wrote the story GARDENER AND THE TEASE, with my version of the scene as I remembered it.

And now I know — the original scene was in the movie INSATIABLE and the actress is Marilyn Chambers.

So now we know!

I’ve been busy taking care of my sick father, but I do have a couple of writing projects coming along soon, including the second part of the BOUND BY THE BURGLAR story, which will have six parts.